Where: In the Ann Arbor Community Center parking lot, 625 N. Main Street, just a block away. Free parking at bagged and labeled meters along Depot street. There will be 31 on them, so have a friend ride with you.

What's Happening: Check out the program.

The Ann Arbor Branch of the National Association for the Advancement of Colored People -NAACP- held it first Juneteenth Celebration in 1994. The branch began this celebration at the urging of Rev. Herbert Lowe, then pastor of the Church of the Good Shepard in Ann Arbor. The idea was to have a community event celebrated in Ann Arbor that was a joyful time in the life of African Americans. Wheeler Park, formerly Summit Park was chosen as the site for this celebration because it had been the center of an African American neighborhood in Ann Arbor. 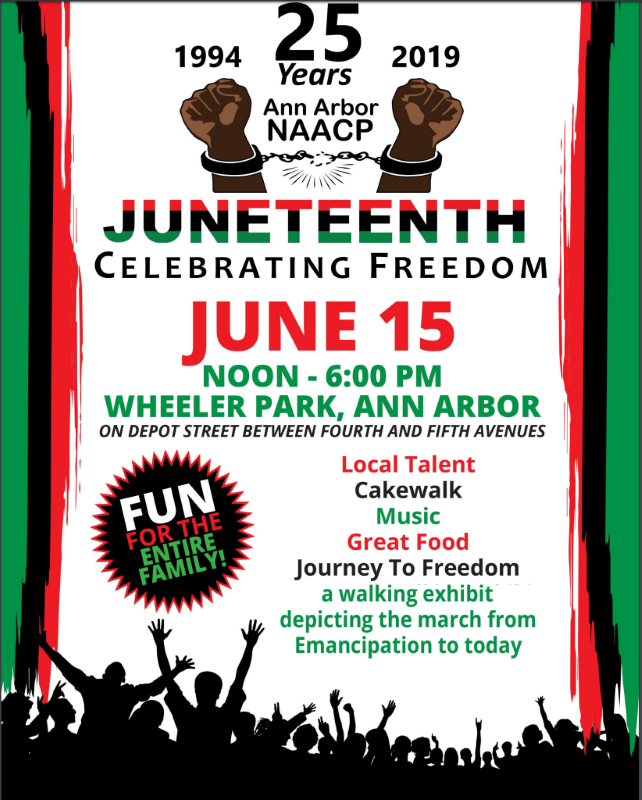 Over the years the event has evolved from Branch members and friends gathering in the park to chat about the state of Black America and peruse literature by and about African Americans. Now the celebration is a joyful gathering of community members enjoying local talent, food, a replica of the cake walk held at Juneteenth Celebrations of yore and vendors. The current celebration is sprinkled with historical facts about Juneteenth and African Americans.

The 2018 Celebration is the 24th year the Ann Arbor Branch has sponsored a Juneteenth Celebration. 2019 portends to be the biggest and best yet as we observe the 25th anniversary of Juneteenth in Ann Arbor.

Since then, Juneteenth has been a day of celebration for many African Americans, a de facto second Independence Day commemorating the end of slavery and a first step toward inclusion in the greater American dream. Currently, a little more than half of U.S. states acknowledge Juneteenth in some form or another, usually on the third Saturday of June.

Only one, however, actually celebrates it as a legal state holiday: Texas. Juneteenth celebrations began there in the years following General Gordon Granger's 1865 proclamation in Galveston and continued for decades. The tradition spread to bordering Southern states, such as Arkansas and Louisiana, as migrating African Americans fanned out from Texas. It reached as far as California - where San Francisco has held one of the nation's largest Juneteenth celebrations for the last five-plus decades - and Minnesota, where Minneapolis boasts a large festival. As a senator, President Barack Obama co-sponsored legislation to make Juneteenth a national holiday.

Juneteenth is enjoying a phenomenal growth rate within communities and organizations throughout the country. Institutions such as the Smithsonian, the Henry Ford Museum and others have begun sponsoring Juneteenth-centered activities with the mission to promote and cultivate knowledge and appreciation of African American history and culture.

Juneteenth today, celebrates African American freedom and achievement, while encouraging continuous self-development and respect for all cultures. As it takes on a more national, symbolic and even global perspective, the events of 1865 in Texas are not forgotten, for all of the roots tie back to this fertile soil from which a national day of pride is growing.

The future of Juneteenth looks bright as the number of cities and states creating Juneteenth committees continues to increase. Getting involved and supporting Juneteenth celebrations creates new bonds of friendship and understanding among us. This indeed, brightens our future - and that is the Spirit of Juneteenth.